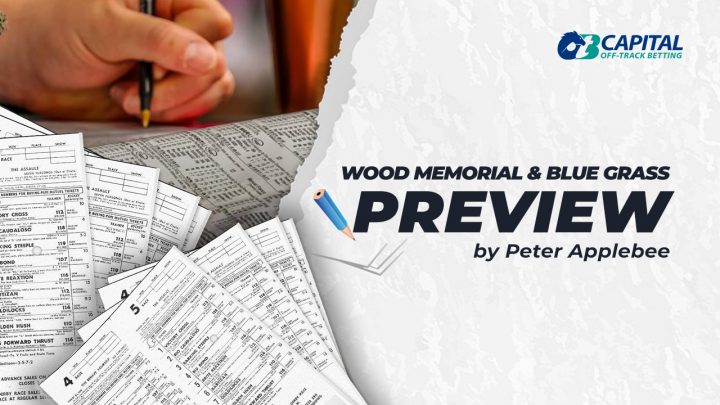 Happy Wood Memorial Day!
The racing season is beginning to bloom in the New York Spring sunshine. Turf racing has returned to the Big A and today marks the first Grade I (The Carter) of 2022 in New York on a card that is headlined by the Wood Memorial. I’ll tackle two of the primary Derby preps being contested today – the Wood at the Big A and the Blue Grass Stakes at Keeneland. Both offer 100-40-20-10 Derby points to get into the starting gate of what appears to be a wide open Kentucky Derby.

Sadly, the Wood doesn’t quite have the status that it once did which was reflected in the downgrade to a Grade II several years ago. This was in large part because no winner of the Wood has won the Kentucky Derby since 2000. But that’s an unfair assessment in my view. Since 2000 the winners of the Wood include Congaree, Empire Maker, Frosted, and Vino Rosso. Doesn’t sound like a Grade II to me.

Mo Donegal: Spiked a fever in advance of the Fountain of Youth so he was redirected here by Todd Pletcher. Has paired up 90 Beyers in last two starts which included a hard fought win two back in the Remsen at today’s distance. Closed decently in the Holy Bull but was no threat to the winner – but faced a short stretch run. He’ll be coming late. Contender.

Golden Code: He was a good third as a 27-1 longshot in the Gotham last out behind Morello (87 Beyer). Pletcher trained colt broke well and was positioned in a nice stalking position – he kept running but wasn’t quick enough to get close the winner. It’s Pletcher…with another step forward he can get close. You won’t get 27-1 today. First time going two turns…race flow works against him with so much speed signed up here. Looking elsewhere.

Early Voting: Winner of the nine furlong Withers last out at the Big A in January (87 Beyer). It is noteworthy that the Beyer team adjusted the speed fig for the Withers up from the original 78 number five weeks after the race. In the Withers this Chad/Klaravich starter broke sharply from post nine – cleared the field in about ten strides, never looked back, and won by open lengths. He’s unusually quick and shows stamina – he has already won at nine furlongs over this surface. Come and catch me – if you can. The Pick.

Long Term: Pletcher enters this maiden off of his fourth consecutive second place finish at the Big A. He ran a career best 86 Beyer in his last attempt where he went to the front but couldn’t hold off the eventual winner. He will not get the lead today – so he’ll have to rate. Blinkers come off to assist in that change of tactics. Lasix comes off also. His last race makes him competitive. Use underneath at a price.

Morello: This Asmussen trained colt is undefeated in three career starts – all three coming at the Big A. He was dominate last out in the Gotham going the flat mile (96 Beyer) by pressing the pace and drawing off in the stretch. He’s been impressive and has gotten better the longer he has gone. But there are questions – he is not as quick as Early Voting and therefore may be left chasing the pace setter. Also, he hasn’t gone two turns before and he’ll be a very short price, nonetheless. I’ll invoke the Harvey Pack axiom about not betting favorites who are being asked to something they haven’t tried before. Use defensively in horizontals.

Skippylongstocking: Two time winner defeated N1X company last out going nine furlongs at Gulfstream (88 Beyer). Not too much to report in his two efforts against listed stakes company and he steps up to a Grade 2 group today. Water is too deep.

A. P.’s Secret: Saffie Joseph tried stakes company last out in the Fountain of Youth. His heels were clipped from behind on the turn that caused two horses to go down. He ran OK that day – but it’s a bit hard to judge given that he was impacted by that incident. Trainer Stat: Saffie Joseph is 6/21 (29%) in graded stakes with a $2.86 ROI on the NYRA circuit over three years.

Barese: Mike Maker trains this NY bred colt by Laoban who is undefeated in three career starts. The last two wins came in NY bred restricted stakes races at the Big A. Last out in the Gander he stalked the pace and kicked into gear in the last 16th to run down the odds on favorite (87 Beyer). Takes on open company here. Outside draw doesn’t help and he isn’t fast enough to clear the field. Passing

Commandperformance: Pletcher trainee is still a maiden after a distant second to Fenwick – who draws the two hole today. Maybe he needed a race last time – but it seems like they are chasing the performance he flashed in the Champagne last fall where he was second to Jack Christopher with a 96 Beyer. Passing

Fenwick: Broke his maiden in his fifth start by going right to the front and taking the field all the way at 21-1 (88 Beyer) – with Paco Lopez making a typically aggressive ride on the front end. That was also the first effort with Blinkers. Lasix was on that day and comes off today. He’s not fast enough to get to the front. Don’t see it.

Trademark: Finished an OK fifth in the Tampa bay Derby (78 Beyer). That performance was not flattered by Classic Causeway’s last place Florida Derby finish. Might show some early speed but talent level is not close to the top ones here. Trainer is 0 for 66 in graded stakes. Toss.

Zandon: Lost by a nose to Mo Donegel in the Remsen going nine furlongs in December. Came back in the Risen Star where he was last early on and made a sustained move on the turn and got clear run at Epicenter finishing a decent third – but he was no match for the winner. Working forwardly into this one and shows speed fig improvements in each start. Contender.

Volcanic: Broke his maiden in January at Gulfstream Park in his fourth start going a flat mile. He followed that up with a third in the Sam F Davis (81 Beyer) where he sat in the second flight but didn’t make much of a move while running on evenly in the stretch. Not fast enough.

Emmanuel: Started his career with two wins for Pletcher and was an OK fourth in the Fountain Of Youth last time (87 Beyer) where he was five wide on the turn and ran on decently but couldn’t match the winner in the final furlong. That tough outside trip that day upgrades his performance. Draws better today and should be up front. The Pick.

Golden Glider: Mark Casse enters this Ghostzapper colt off a two OK performances at Tampa in the Sam F Davis and Tampa Bay Derby where he was 5th and 4th respectively. He was in position in both races but didn’t much of an impact finishing well behind Classic Causeway. Hasn’t broken the 80 Beyer mark in four starts. This is a theme today – not fast enough.

Ethereal Road: Last out he looked to be home in the Rebel (83 Beyer), but Un Ojo caught him late. That day he sat more forward than the deep closing approach that he had employed in breaking his maiden. I expect him to be dropping from the clouds today. Possible longshot to fill out a super.

Rattle N Roll: This one is highly touted but has underperformed in his last two starts of his three year old campaign – now comes back in two weeks after a fourth in the Louisiana Derby. The 90 Beyer that day might make him competitive here, but he was no where near Epicenter and never a threat. He has won over the track. But they are just chasing the Derby…not a winning strategy. Blinkers go on. Trainer Stat: Ken McPeek is 3/40 (8%) with a $0.54 ROI with horses coming back in two weeks or less. Pass.

Smile Happy: Last out he ran a good second to Epicenter in the Risen Star where stalked the pace and ran on well (94 Beyer). That was the first start off of a couple month freshening. That last effort was certainly flattered given Epicenter’s performance in the Louisiana Derby. He’ll be running late, and we know the nine furlongs suit him. Dangerous.

Blackadder: Winner of the El Camino Real Derby (82 Beyer) is entered here by new trainer Rodolphe Brisset after transferring from the Bob Baffert barn so the horse to earn Derby Prep points. He broke his maiden in an off the turf race and the El Camino Real win was on the poly track at Golden Gate Fields. Again…not fast enough

Grantham: Second last out in the Tampa Bay Derby (80 Beyer) . Two back in the Withers he ran fourth (68 Beyer) behind Early Voting and Rebel Stakes winner Un Ojo. Once again – not fast enough.
Picks