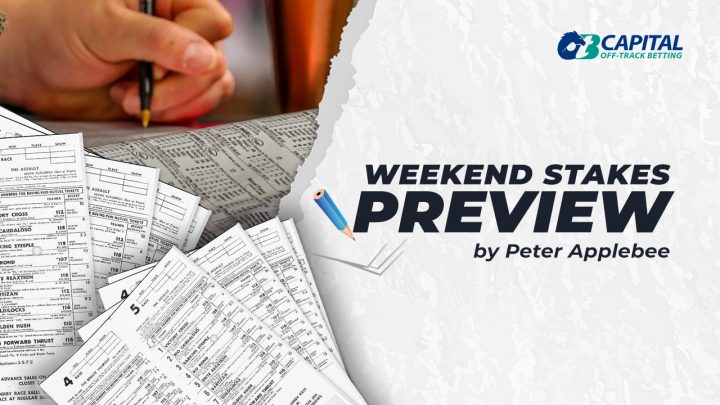 Happy Tampa Bay Derby Day!
Today we focus on Tampa Bay Downs where they have four graded stakes races headlined by the Grade II Tampa Bay Derby which awards 50 Kentucky Derby points to the winner and the Grade II Hillsborough Stakes for older fillies and mares. There are nice full fields for both – hopefully they hold together given the wet forecast.

Looks like a lot of rain in Oldsmar for Saturday – I am assuming that we will stay on the turf, but that it will be soft going.
Chad Brown has won two of the last four renewals of this race and today he sends out two runners. “To Chad or not to Chad” is very often the question in these turf races. Well, you know the deal… all of his runners routing on the turf are dangerous. But he doesn’t win them all, so you’ll get a better price on other contenders since so much of the parimutuel pool gravitates to his turf entrants.

Lovely Lucky: She’s been a bit below the best when competing in stakes. She won an allowance race last summer at the Spa going eleven furlongs but was outrun in two subsequent two graded stakes starts. Last time in the black type Zagora Stakes she ran similarly but was able to finish closer to the leaders. While she has won at the longer distances – it’s possible that today’s turnback to nine furlongs may suit her. Should be running late.

Take Charge Ro: Stalk and pounce type that tries stakes competition for the first time after besting conditioned claimers at Gulfstream on the poly track in an off the turf affair as the 1/2 favorite. That was her second effort off a seven month layoff. Significant class test today. Water is too deep.

Lady Speightspeare: Went off as on the odds on favorite in the Endeavour Stakes and looked to be home free on the front end until she was swamped by Bleecker Street. Going an additional furlong can’t help her chances as she has been caught from behind in both of her turf route efforts against stakes company. She’s good, but she had it her way the last time and it didn’t work out. Now she has to navigate another half a furlong with a contested pace. Only one work since last race. She can get a slice.

Gladys: Won a NIX race last out at Tampa by setting the early pace and taking them all the way. That was that the first win on turf in six attempts. Jumps to Grade 2 company off that win. She probably cannot get that front end trip again with this group. Passing.

Bleecker Street: Undefeated Chad Brown runner steadily progressed through his conditions before taking on stakes company in the Grade 3 Endeavour last month. In the Endeavour she stalked the pace and exploded in the last sixteenth to roll on by the leaders (90 Beyer). She showed a serious turn of foot in that race. Already her third start of the calendar year…she should be ready to roll again and will get some pace to aim at. Extra sixteenth shouldn’t hurt either. The likeliest winner but I will play against her given that it will be her first effort over soft ground. Use defensively.

Rocky Sky: In her only other North American start for Chad Brown she finished last as the second choice in the Saratoga Oaks Invitational. Was wide all the way while stalking and failed to fire when asked. Chad regularly fires first off the bench – so this one is likely to be ready. Takes on elders for the first time. Would appear over her head – but she is working very well in advance of this. First time Lasix. This the “Other” Chad. Mixed feelings but I lean against this one.

Runaway Rumour: Consistent runner by Flintshire has only been off the board twice in eight starts. Starts her four year old campaign today by taking on elders for the first time. Stalk and pounce type who was competitive in graded stakes against three olds last summer at the Spa. Was a strong second in the Lake Placid over yielding ground. Jose Abreu hasn’t won a turf stakes race in the past five years, but this one has been right there multiple times. Upgrades the jock with Jose Ortiz in the irons. The Pick.

Jezebel’s Kitten: She has not won a race since 2019 although she has hit the board several times while mainly running against allowance company. Last out she ran well in the Grade 3 Endeavour Stakes getting up for fourth while coming from far off the pace. She will need to improve to beat the top two finishers from that race. Minor award possibilities.

Nantucket Red: This salty seven year old mare is making her thirty-fourth career start and her twenty-fifth turf effort. She has generally run in allowance company but did get a black type stakes score two back on the dirt in the Wayward Lass Stakes by wiring the field (80 Beyer). Doesn’t possess sufficient speed to do that here. She ran an even sixth last out in the Endeavour with a good rail skimming trip (81 Beyer). Don’t see it.

This is the primary Derby Prep at Tampa Bay, and it attracts a competitive field including the top two finishers from the Sam F. Davis Stakes. It looks like it will be an off track which is something most of these runners haven’t faced before.

Grantham: Last out in the Withers he ran fourth (68 Beyer) behind Early Voting and Rebel Stakes winner Un Ojo. Broke his maiden going two turns on the polytrack at Turfway Park (72 Beyer) three back. He’s proven at the distance – but he’ll need to be a lot quicker even if you do upgrade the Withers Stakes. Not fast enough.

Trademark: This one threw in the towel at about the 3/8th pole last out in the Sam F. Davis. He was in a nice stalking position but caved in when asked to make a move on the leaders. Only one workout since that race. Trainer Stat: Victoria Oliver is 0/66 in graded stakes. Demand a huge price.

Happy Boy Rocket: Broke his maiden in his last effort going today’s distance at Gulfstream. That second career start saw a huge improvement in the speed fig and that was with first time blinkers and Lasix. Lasix comes off today. He has shown he can rate and has won at the distance. Trainer Stat: Bill Mott has hit the board 71% (5/7) entrants in dirt route graded stakes at Tampa. Fills out the exacta.

Classic Causeway: In his most recent start in the Sam F. Davis he ran very well to get the top spot (88 Beyer). He broke sharply and established position – when asked at the top of the stretch he steadily pulled away to win by four lengths. Quick from the gate, good tactical speed, and a closing kick – what’s not to like for this Giant’s Causeway offspring. Broke his maiden at the Spa on the front end with a 90 Beyer by open lengths last summer. Legit favorite. Too short a price to put on top in his first off track effort, but don’t get beat by him either. Use in horizontals.

Giant Game: Last out in the Holy Bull he was hung wide in the first turn, got into a good stalking position but faded badly to eighth. Had minor throat surgery for a displaced palate since the last start which may explain the poor performance that day. Two back start was in the Breeders’ Cup Juvenile where he finished a good third (86 Beyer). Should get a rebound today. Trainer Stat: Dale Romans is 6% (3/53) in dirt route graded stakes in the past two years. Using underneath.

Golden Glider: Was a decent fifth in the Sam F. Davis (77 Beyer). He was well positioned turning for home but found traffic trouble several times but kept on running all the way to the wire. Look for an improvement off that race with a cleaner trip. Won against N1X company two back with a 78 Beyer. Only one workout in the past month. Trainer Stat: Mark Casse is 4/47 with a $1.80 ROI in three year old dirt route graded stakes. Not fast enough.

Strike Hard: Last out in the Sam F. Davis he was wide all the way and flattened in the stretch. Two back has was decent in the Mucho Macho Man but no match for the winner. Will need a significant improvement in his eighth career start. Don’t see it.

Major General: Pletcher trained colt by Constitution is two for two in his career with the last race coming at Churchill Downs in the Iroquois back in September (76 Beyer). In that Grade 3 event he was very game after being four wide on the first turn, he showed tactical speed with an ability to rate. Comes in off an extended layoff but has been working very well since the beginning of the year at Palm Beach Downs. Trainer Stat: Pletcher is 3/37 with a $0.52 ROI in first race off this type of layoff with three year olds in graded stakes. Lean against.

Shipsational: Winner of two New York bred stakes last fall – he took on open company last out in the Sam F. Davis and bested them all but the winner who he faces again today. In the Davis he hopped at the start and was wide on the far turn – with a better trip the outcome could have been different. Has two wins on sloppy tracks. Given his good form in the slop and that strong last outing – the Pick.

Belgrade: Graham Motion enters this undefeated Hard Spun colt who is two for two in his short career. Broke his maiden at first asking (72 Beyer) at 3/5 and then came back three weeks ago to narrowly defeat N1X company at 1/2. Gets the class and distance test today as he goes two turns against much better. Seems a step below these.

Money Supply: Chad Brown enters this one off of a sharp two length win going six furlongs last month (91 Beyer). He was bumped at the start and was at the back of the pack but came running on the turn to sweep by the whole field and finished full of run. Faces winners for the first time and stretches out. Breeding does not scream long on the dirt. Unusual move for Chad as he has only had one starter going long on the dirt at Tampa in the past five years. I don’t see him besting this group.
Spin Wheel: Last out in the Holy Bull he was spun wide on the first turn and was never much of a factor. Bad news is he drew outside again today. This Hard Spun colt broke his maiden at nine furlongs at Churchill two back. Should be running late but appears over his head. Potential longshot to fill out a superfecta.