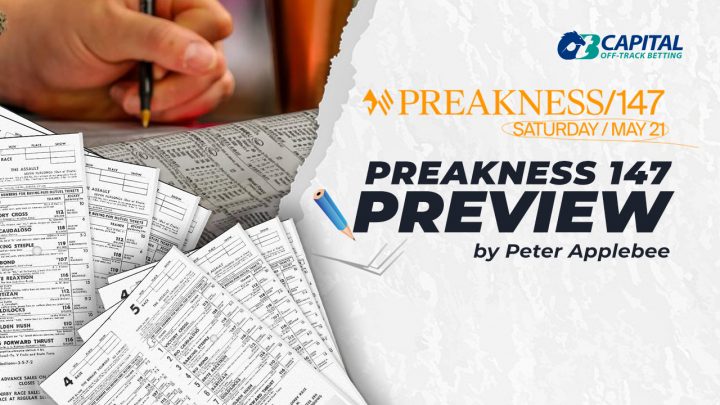 Happy Preakness Day!
new shooter: nü shü-tər (noun) a participant in an activity that they had not previously partaken; becomes common parlance in mid-May when referring to a horse who is entered in the Preakness Stakes but did not run in the Kentucky Derby; plural: new shooters.

The phrase of the week is “new shooter” with only three Derby horses entered back in the Preakness Stakes.

I’ll tackle the Grade II Dinner Party on the turf and the Preakness Stakes.

Tango Tango Tango: Two for two this year and comes here three weeks after winning an allowance race at Belmont going ten furlongs at a big price (92 Beyer). He is a stakes winner having won the America Derby last summer at Arlington where he was a strong second in the Bruce D. Tactical type who prefers to sit in the second flight make his move in the stretch. If that last one was a tightener – look out. Possible at a price.

Novo Sol: Saffie Joseph ships in from Florida in a turn back from the twelve furlong Pan American Stakes where he was a decent third behind Gufo and Abaan (95 Beyer). That was his first North American stakes attempt after coming stateside from Brazil. In the Pan American he saved ground on all three turns from the one hole and briefly loomed boldly only to flatten. A turnback may assist him and he could certainly step forward. Minor award candidate.

Set Piece: This is the second start of his six year old season – last out in the Maker’s Mark Mile he ran evenly in the stretch after being wide on both turns (100 Beyer). That was a very good effort off the bench against tougher than he faces today. Loved the old Churchill turf course where he won three in a row last spring before running a good second to Got Stormy in the Fourstardave. He’ll be closing from well off of it, so he is a bit pace dependent to get top prize. Use underneath at a short price and in horizontals.

Beacon Hill: Michael Matz enters this one off a close second via a head bob in a N3X race at Keeneland in April going todays’ distance. This marks his first attempt at graded stakes company in what will be his tenth career start. Likes to be fairly close to the pace make his move from there. Gets the acid test today but has shown he will keep running. Bottom side of trifectas and supers.

English Bee: In three starts this year this Graham Motion trained colt has run well in three Grade 3 stakes at Tampa and Gulfstream but only managed to hit the board once. This one is still eligible for N1X company after eight career starts. He’s a nice allowance/overnight stakes type – but he faces much better here today. Was a close up seventh last year in this race. Water is too deep.

Atone: He has run well in all three starts this year – but has only hit the board once – in the Ft. Lauderdale (98 Beyer). In all three efforts he was well positioned in the stretch and kept on running – but didn’t show that quickening needed to finish of a race. Faces an easier group than he did in the Makers Mark at Keeneland where he needed more late (101 Beyer) or Pegasus Turf at Gulfstream (98 Beyer). Look for Irad to get this one more forwardly positioned and control the pace, which should suit him. The Pick.

Nathan Detroit: Best turf Beyer is a 77 in eight attempts on the grass. Last out he ran a 73 Beyer while besting N1X company at Laurel. Too slow early and too slow late. Should be 50-1 or higher. In over his head.

We have nine entered here with three coming out of the Kentucky Derby, led by Epicenter who was a very good second two weeks ago.

D. Wayne Lukas goes for his record tying seventh Preakness Stakes with the filly Secret Oath. She would be the seventh filly to win the Preakness Stakes. While two fillies have won this race recently (Swiss Skydiver in 2020 and Rachel Alexandra in 2009) – Rachel’s win was the first filly win in the Preakness since Nellie Morse in 1924. By chance, 1924 was the last year that this race was run at a mile and an eighth.

Simplification: Ran a good fourth in the Kentucky Derby (96 Beyer). He sat well off the pace and made steady improvement through the field and kept on running to the wire but was unable to challenge the top three finishers. Two back in in the Florida Derby he pressed the pace and briefly took the lead but was bested by both White Abarrio and Charge It (92 Beyer). He’s a versatile runner who has shown he run well from any position in the race. That tactical flexibility will serve him well. Trainer Stat; Antonio Sano is 1/47 in graded stakes over the past five years, but 19% hit the board. His sole graded stake win from that sample win was with Simplification on the Fountain of Youth. Hits the board.

Creative Minister: Two wins and a second for this Ken McPeek trained colt in three career starts. Last out he won an N1X race at Churchill while earning a 92 Beyer. That most recent win came just two weeks ago and saw Creative Minister overcome a poor break to rally down the lane for the open lengths win. Supplemented here for $150,000 so the connections believe in this one. Lasix comes off today. Pass.

Fenwick: Failed to fire in the Blue Grass Stakes in his first graded stakes effort – where this Curlin sired colt was done after a mile and faded to last. Two back he broke his maiden at Tampa Bay via a front end score (88 Beyer). He is on his third trainer of the year in the form of Kevin McKathen. Nope.

Secret Oath: Big time win in the Kentucky Oaks (94 Beyer) lands her here against the boys in the Preakness. She was impressive in the Oaks where she sat chilly and made her move on the turn by swinging out and won by a comfortable two lengths. Two back she took on the boys in the Arkansas Derby (87 Beyer) where she was in position and finished a decent third – but she was no threat to the winner in the stretch. Prior to that effort against the colts she dominated filles in the two Kentucky Oaks prep races held at Oaklawn. Gotta love Lukas taking his shots. But she has hasn’t gotten above a 94 Beyer in eight lifetime attempts. She will need to make an eight to ten Beyer point jump to win here in her fifth race of her three year old season. That seems unlikely. Maybe a small slice.

Early Voting: Good second place finisher in the Wood Memorial (96 Beyer) to Mo Donegal where he got to the lead but was run down by the winner to lose by a neck. Two back he was the winner of the nine furlong Withers at the Big A (87 Beyer). He’s speedy and has shown the ability to get to the front and keep on going. Legit front end threat and is a value play given the money Epicenter will take. Trainer Stat: Chad Brown has a remarkable 41% win rate from 70 dirt route starters over the past five months with 74% hitting the board. (credit: David Aragona) Legit win candidate.

Happy Jack: Two distant third place finishes in the San Felipe and Santa Anita Derby earned him enough points to gain entry into the Derby. He wasn’t all that competitive in either of those prep races and he wasn’t competitive in the Derby as he was towards the back of the field for the entire ten furlongs finishing 14th. His Beyer top is 83. Way too slow.

Armagnac: After fourth and six place finishes in the Santa Anita Derby and San Felipe, trainer Tim Yakteen aimed lower, and Armagnac responded by dominating allowance company with a 93 Beyer two weeks ago. Ships cross country to run back in thirteen days. Tries graded stakes company again here. Don’t think he will have it his own way here today on the front end. Appears to be up against it. Pass.

Epicenter: Derby runner up (100 Beyer) sat mid-pack off a super quick early pace got to the front as they turned for home and repelled a strong challenge from Zandon in mid-stretch only to get caught late by Rich Strike who shot the rail. I thought he was much the best that day – and his lose obscured his fantastic stretch drive where he repelled Zandon. Epicenter dominated the Fairgrounds Derby preps with wins in the Gun Runner, the Risen Star and Louisiana Derby. He has shown to be versatile with a front end score in the Risen Star (98 Beyer) and he stalked Zozos in the Louisiana Derby (102 Beyer). Legit morning line favorite given his body of work. Trainer Stat: Asmussen wins at a 25% clip over the past year (27/109) with horses coming back in two weeks or less. The Pick.

Skippylongstocking: Ran an OK third last out in the Wood (91 Beyer). In that effort he was nowhere near the top two and basically kept running while passing tired foes. Two time winner defeated N1X company two back going nine furlongs at Gulfstream (88 Beyer). Would need a significant jump in speed figs to win here. Trainer Stat: Saffie Joseph wins at 8% over the past two years in dirt route graded stakes – but 35% have hit the board. Possible slice.