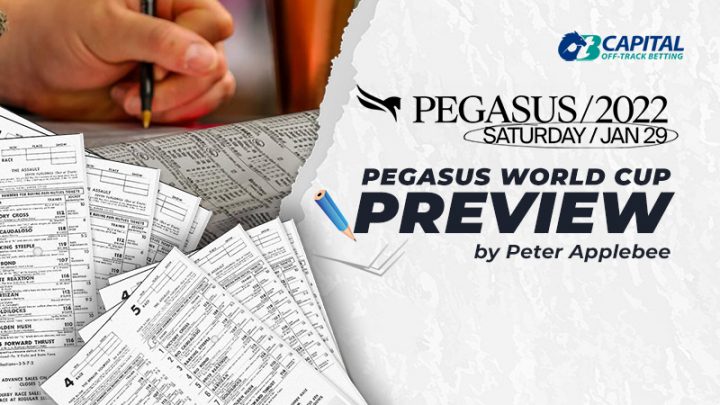 Happy Pegasus Day!
“If you build it – they will come” calmly announced the ethereal, disembodied voice in Field of Dreams. However, that disembodied voice hadn’t contemplated Knicks Go and Life Is Good significantly thinning out the competition in a $3 million race.
However, the other Grade I on the Gulfstream card Saturday is a highly competitive rendition of the Pegasus Turf Invitational., You could make a strong case for at least half of the twelve entries as Colonel Liam attempts to defend his title.

Space Traveller: This is a bit of a perplexing horse. He shows promise but in his four North American starts he has managed to hit the board only once. Last out in the Grade 2 Fort Lauderdale he was mid-pack and flattened in the stretch. Two back it was a similar story with a similar trip. Blinkers go on today to try and keep him closer. That plus the inside draw should help as well. Jamie Spencer ships in to ride. That’s a signal. Dangerous longshot.

Atone: Stalk and pounce type has two wins and two seconds in his last four starts with increasing Beyers in each effort dating back to last August. Last out he made the first move on the speed but never got close to loose on the lead winner Doswell that he faces again here today. Needs another improvement to hit the board.

Flavius: First start for Maker barn from Chad Brown following his last start in November in the Artie Schiller where he ran a good third. Looks like shorter might be better for this one. Solid work tab indicates that the horse is ready is to go and this horse’s best puts him right there.

March to the Arch: This late runner has been competitive but a touch below graded stakes level competition. Last out in the Artie Schiller at the Big A in November he was towards the rear and made up some ground but was no threat. His form was going the wrong direction last fall let’s see if a freshening will get him back to his 2020 form. Possible small piece.

Hit the Road: Paired up triple digit Beyers in his last two outings in SoCal where he finished behind Mo Forza both times. He is entered here off an almost four month layoff. While he was going pretty well last Fall it’s tough to keep that kind of form together off a lengthy layoff. He could surprise but I’ll look elsewhere in competitive field.

Colonel Liam: The defending champion of this race is entered off a seven plus month layoff. His last start was in the Manhattan on Belmont Stakes Day last June where he was wide around both turns and he faded in the last furlong. Today he gets his preferred nine furlong distance. But be warned that his wins have come via inside ground saving trips where he found a way through traffic at the top of the stretch to make a late move. Should be ready to go. Legit favorite as he two for two at Gulfstream and at the distance. Using defensively.

Doswell: The three career wins for this runner have been gate to wire affairs with his best effort last out in the Grade 2 Fort Lauderdale. When he has not made the lead early on his performances have been decent – but he appears to need the lead to win. He is unlikely to be fastest early today with Never Surprised in the field. Possible minor award.

Sacred Life: This Chad Brown late runner has traded head bobs in his last two start with Field Pass who starts just to his outside today. Two back in the Knickerbocker Stakes Sacred Life came flying late to just get his head down on the wire (98 Beyer). Last out he didn’t show the same turn of foot when lost in a photo to Field Pass but there was some traffic crowding him in the stretch and that may have made the difference. There should be a pace to run into and he can handle nine furlongs. If you get anything close to the 6-1 ML that’s an overlay. The Pick.

Field Pass: This pace presser type has traded photo wins with Sacred Life in his last two starts. Last out in the Seabiscuit he sat off the pace a bit further than normal early on, made his move with almost a half mile to go, and just held off Sacred Life to get the win. Consistent performer for Maker may be comprised if he stays too close to today’s pace. Potential piece of the action.

Channel Cat: This seven year old warrior has danced a whole lot of big dances but has generally wanted longer than today’s nine furlongs. He likes to be forward in his races, but the pace tends to be too sharp for him at this distance. Blinkers are off after a one race experiment. He’s better suited for the Grade 3 W.L. McKnight earlier in the card at twelve furlongs – but they are only running for $200k vs. $1 million here. Doesn’t seem like this race is a match.

Cross Border: This closer’s form has gone a bit sideways for Maker since winning the Bowling Green at Saratoga last summer. They did win with him last out at Turfway on the polytrack – but he’s against some tough ones today and I think he prefers longer on the turf at this point in his career. Gotta route a bit for Reylu Gutierrez in the saddle, but I think this one is up against it today. Passing.

Never Surprised: This is the speed of the speed. He was going to go no matter where he was drawn, and Saez will be sending from the twelve hole. Quality runner who can get to the front and keep his pace up over a route of ground. Was just nipped twice this fall by a very good Public Sector and easily defeated overmatched fields in his last two outings. The question for this one is twofold – he takes on some serious older foes for the first time and he goes farther than he has ever gone before. That’s tough for a “need the lead” newly turned four year old. I think he’ll have to go too fast early on from the twelve hole to hold all of them off for nine furlongs. But I like him for a slice.

This looks to be a match race between Knicks Go and Life Is Good. The balance of the field is certainly a step below those two, but we should get one heck of a battle up front between the top one. Buckle up this should be fun.

1. Knicks Go: He goes fast early, has a high cruising speed, accelerates around turns, and kicks on late. The nine furlongs will suit him just fine, and we know he likes the track as he earned a 108 Beyer in winning last year’s rendition of this race. Last out he won the Breeders’ Cup Classic (112 Beyer). He is very classy, but Life is Good is quicker from the gate and will likely get ahead of him into the first turn. Can Knicks Go overcome this set up is the key question of the race. It’s a coin flip. I’ll pick Knicks Go based on his class, but I wouldn’t bet the house on it.

Chess Chief: All five career wins have come at Fairgrounds. Away from Fairgrounds this one has been overmatched against legit graded stakes competition and has zero wins from twenty starts. He was scratched last week from the Louisiana Stakes at Fairgrounds to run here instead. He was over his head in both races, but a $3 million purse in this race was the likely the deciding factor. Water is too deep here.

Stilleto Boy: Ships in from his SoCal base for this race. In his last four efforts he has run well but behind Flightline in the Malibu, Knicks Go in the Breeders’ Cup Classic, and Medina Spirit twice. That’s pretty good company – but the key phrase was “run behind”. In the five starts since winning the Iowa Derby in July he has managed a second and two thirds. Doesn’t appear fast enough, but should be in a nice stalking position behind the speed and should be running late. Underneath piece, and an outside chance of an upset if the pace melts down.

Life is Good: The Breeders’ Cup Dirt Mile winner (109 Beyer) comes in today as a horse on the rise. As a three year old, he defeated elders in the Kelso and then in the Breeders’ Cup Dirt Mile. In both of those wins he was the fastest from the gate and took them all the way. He appears to be the early speed here and draws outside of Knicks Go. He should be going from the drop of the hat and Knicks Go will have to try and keep up. The race flow favors Life Is Good since Knicks Go has needed the lead during his run over the past year. The question will be can Life Is Good hold off Knicks Go for nine furlongs. Using on all tickets.

Empty Tomb: Last out he was a game second in the Queens County Stakes (96 Beyer) at the Big A. This is a horse that can be competitive at nine furlongs in overnight stakes races, but he will be chasing early and should fade away by the time then turn for home. Not today.

Sir Winston: Mark Casse enters the 2019 Belmont Stakes winner off a successful fall campaign at Woodbine running on the poly track. That Woodbine fall campaign included a wins in the Grade 3 Valedictory Stakes and two seconds against Stakes company. His late running style will always expose him to traffic trouble, and he has repeatedly found it. This one should be coming late and is working nicely at Palm Meadows. But I don’t see the pace melting down in a manner that would be needed for him to pull the upset. Potential for minor award.

Title Ready: Winner of last year’s Louisiana Stakes takes a big swing here today. Today is his third start off a seven month layoff and the first two starts don’t exactly inspire confidence with a third against Optional Claiming competition and a sixth in an overnight Stakes. Maybe there are excuses – the last start was on a muddy track and there were traffic issues in the prior effort. He is working well at the Fairgrounds in advance of this. He will be coming late into a hot pace scenario.

Endorsed: This Mike Maker trained colt would appear to be very much up against it. He has not won a race in fifteen starts with his last win coming against Allowance company in May of 2020. This horse has never won a stakes race, but he did run a good second over the track last out in the Mr. Prospector going seven panels last month. Maker can work miracles with horses sometimes – but those tend to be going long on the turf. This would be a shock.

Commandeer: Jimmy Toner enters this one of an Allowance win at Churchill Downs two months ago. He is way against it here today. His career Beyer top is 83 on a fast track and he is on the outside with a short run to the first turn. This would be a huge surprise. 50-1 is an underlay.