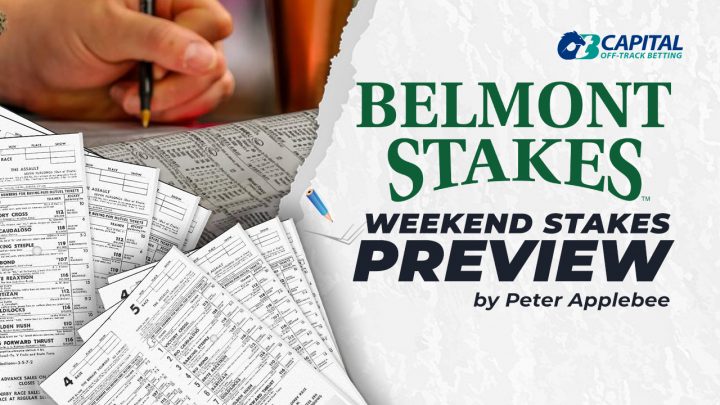 The Met Mile is the most important middle distance dirt race in North America. Today’s renewal is another example of why the Met Mile should be returned to its proper glory as a feature race rather than run here on the undercard of the Belmont Stakes. It’s a compact field of five but we get the 2021 Breeders’ Cup Sprint winner (Aloha West), the winner of the Carter (Speaker’s Corner), and the undefeated Flightline.

Flightline: Uber talented colt is undefeated with all three wins coming by double digit lengths. He last raced in December where he demolished the field in the Grade 1 Malibu and earned a 118 Beyer. No one has yet to lay a glove on this one. There are clearly issues since he has only made it to the track three times in over a year, but those three starts have yielded Beyers of 105, 114, and 118. Doesn’t appear that the extra furlong is an issue. He’s the legit odd on favorite and is a must use in horizontals but I will look elsewhere for the top spot given his inside draw and the very serious challenger he faces in the form of Speaker’s Corner. Using on all tickets.

Speaker’s Corner: Three for three this year and last out this Mott trained colt bested a nice field in the Carter Handicap going seven furlongs at the Big A as the odd on favorite (114 Beyer). That was his fifth straight triple digit Beyer dating back to last Fall. He certainly can handle the eight furlongs as evidenced by his wins in both the Gulfstream Park Mile (106 Beyer) and the Fred Hooper (102 Beyer). He’s two for two at Belmont and at the one mile distance. Draws to the outside of Flightline. The Pick.

Aloha West: Winner of the 2021 Breeders’ Cup Sprint was handled by Jackie’s Warrior last out off a six month layoff in the Churchill Downs Stakes (95 Beyer) as he couldn’t keep up in the stretch. Does this one have enough to best the top ones here? He’ll need a career performance to win, and his Beyer top is only a 102. Hard to see him keeping up early but he will have a hot pace he can try and close into. Awful tough spot to try the flat mile for the first time. Looking elsewhere.

Happy Saver: This Pletcher trained colt won his first five starts and while he hasn’t won in his last four efforts – he hasn’t been off the board either. Last out in the Alysheba (99 Beyer) he was three wide and made the lead turning for home only to be out run by Olympiad in the stretch. That lack of a closing punch has been a trend with this one. He’s tactical enough to get into a position to get the win, but doesn’t have the finishing move to get the top prize. Three seconds in a row are evidence of this. He loves Belmont and will be running late. Minor award.

Informative: Uriah St. Lewis takes a shot at the big boys here with this Bodemeister colt. Winless in eight starts since he scored at 80-1 in the Grade 3 Salvatore Mile at Monmouth last summer (97 Beyer) where came from the clouds. Last out in the Westchester Stakes (75 Beyer) he finished last of five runners. That race was off a five month layoff and was on a sloppy track. Maybe both are legit excuses. You’ll get a big price for sure. Working sharply at Parx in advance of this. Trainer Stat: St. Louis is 4/48 in dirt stakes race – but hits the board at a 20% clip. Should be running late. Minor award possibility.

I am not sure the last time the Peter Pan winner was the morning line favorite in the Belmont – but it has to be pretty rare. Let’s be fair – this is not the strongest edition of this race. But it is a very good betting race. We have two Preakness runners coming back and three Derby runners led by Rich Strike. As a side note – no horse will compete in all three legs of the Triple Crown this year.

We the People: The Peter Pan winner comes back here for Rodolphe Brisset after demolishing that field with a 103 Beyer. Likely early leader who took to the sealed track in the Peter Pan and will try to take them all the way. The lack of pace here may potentially assist this runner. But I am skeptical that he can reproduce that effort from the Peter Pan – sealed tracks can do funny things – and the price here is way too short to find out. Look for a regression. Fade him.

Skippylongstocking: Ran an OK fifth last out in the Preakness (94 Beyer) where he was decent but no threat to the top three. He has been steadily improving his speed figs in five starts so far this year but will need another jump to win here. Trainer Stat: Saffie Joseph wins at 8% over the past two years in dirt route graded stakes – but 35% have hit the board. Underneath slice at best.

Nest: Pletcher trained filly tries the boys today off of a second to Secret Oath in the Kentucky Oaks with a 91 Beyer. That fig will need to significantly improve to win here today. That effort was preceded by a nice eight length win in the Ashland (92 Beyer). She doesn’t appear fast enough to get the top prize, but the breeding is there for this distance and her running style should also suit the twelve furlongs. Underneath player.

Rich Strike: The Kentucky Derby winner returns here off a five week break after passing on the Preakness. Got a trip of a lifetime at Churchill (101 Beyer) to run down Epicenter. He has two wins over the Churchill surface and is zero for six elsewhere. Lacks early pace and will try to come running late again. That is not typically a winning strategy in this race where you want to be closer to the lead to get all the marbles. Price is way too short. All reports are positive on his works coming into this race. Will lightning strike again? I don’t think so and at 7/2 I don’t want to back a longshot winner next out after a perfect trip. Play against.

Creative Minister: Ran a very good third last out in the Preakness (100 Beyer) after being supplemented into the race by his connections. Two back he won an N1X race at Churchill on Derby day while earning a 92 Beyer in a stalk and pounce trip. His Beyers have progressed in each of his four races, and he looked right at home in grade 1 competition in the Preakness. Potential to get the score by sitting off the early speed and getting the jump on the closers. Using.

Mo Donegal: Had a very tough trip in the Derby where he was ten wide on the turn and still got up for fifth. Two back he received a great ride in winning the Wood (96 Beyer) where worked a perfect trip from off the pace and got to Early Voting late. He possesses more tactical speed than Rich Strike and should be well positioned to show off his strong late kick. Shouldn’t face the traffic issues that twenty horse Derby field presented. Breeding is there for the marathon distance. Irad stays up for Pletcher. The Pick.

Golden Glider: Mark Casse has a consistent performer – but who was beaten by We the People by ten lengths in the Peter Pan last out. Zandon, and Classic Causeway (twice) also got the better of him in earlier prep races. Beyer top is an 87. Not fast enough. Toss.

Barber Road: Last out in the Kentucky Derby he was a no threat sixth (94 Beyer). Consistent performer in graded stakes at Oaklawn this winter where he had three seconds and a close up third. Hasn’t shown the needed punch at the end of races to get the top prize. Two back in the Arkansas Derby (88 Beyer) Cyberknife got the better of him. Grinder type who will keep running. Blinkers come OFF. Rosario picks up the mount. Maybe fills out a super.