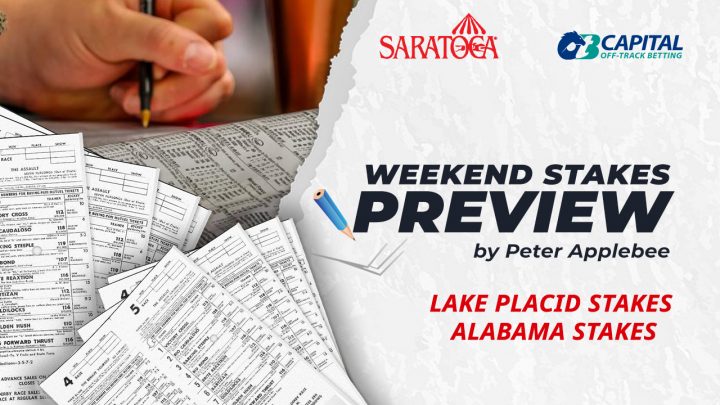 Happy Alabama Day!
Today we have two Graded Stakes on the card for three year old fillies. The Lake Placid goes eight and a half furlongs on the Inner Turf and the Alabama at ten furlongs on the dirt.
The Alabama has a big time match up. Secret Oath was the divisional leader before she was crushed by Nest last month in the Coaching Club American Oaks. If either Nest or Secret Oath win the Alabama today – they will be the three year old filly divisional leader heading into the Fall.

Charlie Appleby surprised a lot of people by keeping With The Moonlight in Saratoga after her win two weeks ago in the Saratoga Oaks Invitational. But here she is – fresh off a stakes win for very serious connections and running back in thirteen days. Appleby is a ridiculous 50% (10/20) in graded turf route stakes in North America over the past two years, with 80% of those runners hitting the board.
Not to be outdone – Chad Brown sends out four as he aims to break the tie with Bill Mott, Christophe Clement, and Jimmy Toner for most wins (3) in this race.
The top three runners from the Lake George Stakes return here led by winner Dolce Zel.

With The Moonlight: Charlie Appleby wheels this filly back in thirteen days off of a nice win in the Grade 3 Saratoga Invitational Derby (92 Beyer). She attended the pace that day and ran on by when asked to win by almost two lengths. Appleby shipped this Frankel filly over for the Belmont Invitational Oaks in June and she ran a strong second (89 Beyer) in her first North American effort. She has been jogging on the track since her last race and she can win on a quick run back – she broke her maiden off of an 18 day break last year. Turns back a furlong from the last effort – that should suit her as she has won at both a mile and a mile and a sixteenth . Luis Saez picks up the mount for William Buick who did not come in from the U.K. Should be up close again today. Trainer Stat: Charlie Appleby is 50% (5/10) with starters coming back in under 30 days in North America – 90% of those runners finished in the money. ’Nuff said. The Pick.

Sail By: Won the Miss Grillo last fall at today’s distance (69 Beyer) and has hit the board twice this year. Most recent start was in May in the Soaring Softly (83 Beyer) where she got her nose in front turning for home and was game, but just gave way a bit in the last sixteenth. Stretches out to two turns today. Will need a major improvement to compete here.

Eminent Victor: Last out in the Lake George she ran well but lost by half a nose (86 Beyer) to her stable mate as she had the cleaner of the trips after an early stumble. Two back she bested the field in the ungraded Wild Applause (88 Beyer) by sitting off a quick early pace then making steady progress to get the lead. That’s the right word with one “steady” – she is not visually spectacular- but she gets the job done for Chad Brown. Trifectas and Supers.

Consumer Spending: Two wins from three starts this year for Chad Brown. Last out in the Belmont Oaks (89 Beyer) she was a decent third and showed an excellent turn of foot in the last hundred yards to close the gap on the top two that included With The Moonlight. Cuts back to her preferred distance today where she is three for four with a second. Should be running late. Win candidate.

Dolce Zel: Winner of the Lake George Stakes last out (86 Beyer) where she got a ground saving trip but was blocked in the stretch and had to wait for running room but still won by a nostril. That was her second stakes win of the year – the first coming in the Florida Oaks back in March with a similar stalk and pounce trip. She’s very competitive here.

Haughty: In two starts this year she won the Penn Oaks at 2/5 at Penn National over soft going and was a distant ninth in the Belmont Oaks Invitational (77 Beyer). She will look to stalk the pace and move in the stretch. This field appears too tough for her as she doesn’t appear fast enough. Looking elsewhere.

Canisy: Two wins and a second in three career races for this lightly raced filly. Makes the jump to graded stakes competition after winning a first level allowance race on opening day of the meet for Christophe Clement (84 Beyer). That day Castellano got to the front from the inside post and took them all the way. Broke her maiden three back with a stalk and pounce trip at Belmont (79 Beyer). Passing.

Koala Princess: Ran a close third in the Lake George last time (83 Beyer) in her first start as a three year old for Arnaud Delacour. She got a nice inside trip that day but couldn’t run down the leaders. She was the favorite last Fall in the Juvenile Filly and Mare Turf last Fall – finishing a close up seventh . She took seven months off between the Breeders’ Cup effort and the Lake George. Second off the layoff and has a race over the course and she’ll be coming late. Potential for a minor award.

The Alabama features the latest matchup between of Nest and Secret Oath. Secret Oath got the better of Nest in the Kentucky Oaks – but Nest rebounded with an excellent performance in the Coaching Club American Oaks. The ten furlong Alabama traditionally provides the sternest test of stamina that these three year old fillies have faced. However, Nest already went twelve furlongs against the colts in the Belmont Stakes and Secret Oath went a mile and three sixteenths in the Preakness.

Skratch Kat: Stalker type has won twice in five career starts while competing primarily against Allowance company for Philip Bauer. Last out she was very game against Optional Claimers as she hooked up with the leader in the stretch and bested that one while holding off a closer to get the win (85 Beyer). Blinkers came off for that race and maybe that did the trick as her Beyer jumped sixteen pointed from the previous effort. Arrogate on top – so there is distance in the pedigree. Trainer Stat: Philip Bauer has four wins a second from seven starters at this meet. Use in exotics.

Goddess of Fire: She is winless in 2022 but she does have four seconds from five starts while running behind some good ones in the Rachel Alexandra (80 Beyer), the Gulfstream Oaks (94 Beyer), and the Kentucky Oaks. Raced in the one mile Wilton Stakes on opening day in the first race out of the Wilson Chute. She was decent that day and ran on well in the stretch to get up for second. Does she want the extra quarter mile today? Blinkers go ON. Use as a potential price in exotics.

Gerrymander: Chad Brown enters this filly off of a bit a freshening. Last time she raced she won the Mother Goose at Belmont (98 Beyer) by sitting behind the pace and rolling by at the quarter pole to win by a comfortable three lengths. Today will be her first two turn effort and she stretches out again after mainly running in sprint and flat mile contests. She has finished in the exacta in five of six starts. Win candidate.

Nest: Last out in the CCA Oaks she was much the best for Pletcher drawing off by twelve lengths in the stretch in one of the most impressive performances of the meet (104 Beyer). She got to the lead in the CCA Oaks and when they came for her, she kicked away easily. In the Belmont Stakes two back she was a very good second (95 Beyer) to Mo Donegal – so she can get today’s distance. Should be on, or attending the pace. I don’t think any of these can’t keep up with her for a mile and a quarter. The Pick.

Nostalgic: Mott trained filly was beaten by fifteen lengths in the CCA Oaks while finishing third (81 Beyer). She was also a distant 10th in the Kentucky Oaks where she found trouble and was never a factor. Last win was in the Gazelle at the Big A (86 Beyer). She doesn’t have the look of a filly who want to go this long. But I guess most of them don’t. Passing.

She’s Keen: Broke her maiden last out over the track for Rusty Arnold as she paired up 82 Beyers going nine furlongs. Appears to do her best running up front but she won’t be there today. Race flow works against her, and she will need her Beyer to jump twenty points to contend. You’ll get a price.

Secret Oath: In the CCA Oaks (84 Beyer) she hung close to Nest – until the real running began and then she was left reeling in the wake of that Pletcher filly. Lukas has a good one here who won the Kentucky Oaks (94 Beyer) by open lengths and was a solid fourth in the Preakness Stakes (95 Beyer). I am not sure she wants ten furlongs, and it appears her primary rival has moved ahead of her. But Lukas is all positives heading into this. Underneath piece.